Holy crap. I swear I was only playing Skyrim for five minutes, but I just looked at the date on this post and it has been a year since I was last here. A whole year lost in the Nordic province. Whoops. I guess I can understand how I got a little distracted. I finished the game four hundred and twenty times but I still wanted more, so I joined the modding community. I modded the game so all the human races looked like Smurfs, all the elven races looked like the centaurs from Fantasia, the beasty folk looked like critters from Labyrinth, and the dragons all look like Puff. The changes were only cosmetic, though, so I re-wrote the base coding for the game and made them all self-aware and sentient and turned Skyrim into a living digital ecosystem. At that point I realized I couldn’t ethically justify slaughtering peasants for their few measly coins, so the game lost some of its appeal. Sure, they saw me as a god, but I’ve never been one for hero worship. I think I really disappointed them when I failed to close the Oblivion gates when Nosey Smurf accidentally opened them. I’ve been meaning to head back in there to clean up the demons tearing up the landscape, but Geoff buzzed me to say he had some news to share, so here I am. 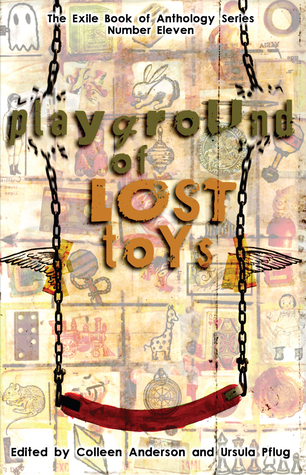 The Playground of Lost Toys collects 22 short stories about the toys that haunted us in childhood. Toys we lost. Toys we forgot. Toys we cannot forget even after years of counseling and decades of alcoholism. Toys that still keep us awake at night five lifetimes after we initially played with them. You know the ones.  Exile Editions is putting out the anthology, and the fantastic Ursula Pflug and Colleen Anderson edited the collection. Geoff’s story is about a lost video game. After my year-long love affair with Skyrim, I suppose I can appreciate what it would be like to lose my darling. Speaking of, Papa Smurf is being chased around by a daedric prince, so I should probably port back in there.

The Playground of Lost Toys will be released in November. Stay tuned for details on the release party!